Do I need a SAN or a NAS for Vmotion – the VMware VSA Virtual Storage Array
Posted on March 3, 2013 in Blog, Storage Blog
The following two tabs change content below.

Or – How can I do shared storage at low cost for my VMware Virtualisation setup!!

SAN’s and NAS boxes are often hoist upon smaller IT shops, as part of a ‘virtualisation’ solution.

The price of SANs continues to plummet, and in most cases, they are reliable enough, simple enough and certainly low cost enough to be an obvious choice.

But in many cases, organisations have invested in great quality Dell, IBM and HP Servers, that are full of high speed disk, with State of the Art RAID Controllers (Dell Perc, HP Smart Array, IBM ServeRAID), offering adequate cache and IOP acceleration.

These are the Servers that will run VMware ESXi – But these servers can also run a Product from VMware (VMware VSA), that will tie all of the storage locked away in each Server, into a unified shared storage array.

As we know – great functionality such as Vmotion requires shared storage.

VMware VSA runs inside each ESX Host (the Physical servers running VMware) and performs the following: 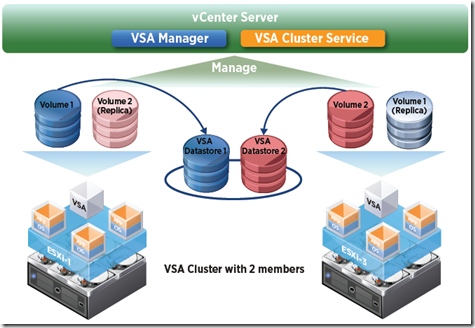 From here, its simple.

If any ESX Server were to fail, the Storage, being Synchronously mirrored to another ESX Server, ‘kicks’ in.

If I have further ESX Servers that need/require shared storage, then these Servers can access the 2-Node or 3-Node VSA cluster and take advantage of the NFS share presented – These further servers are not required to run VMware VSA though.

In all, this is very clever technology from VMware – clever in the sense of: