Unitrends – New Features and Function in Version 7.1– Time for Version 6 Customers to Upgrade

Unitrends – New Features and Function in Version 7.1– Time for Version 6 Customers to Upgrade
Posted on June 9, 2013 in Unitrends
The following two tabs change content below.

Previously: Unitrends using a WAN ‘Vaulting’ process for sending backups, across the WAN, to a second Unitrends appliance.

With Vaulting, the remote data was in a ‘locked’ down Archive format, which required

This was great for those customers with Recovery time Objectives of 24 hours plus.

Vaulting also sent ‘incremental / delta’ back chunks across the WAN – It wasn’t too bad on WAN bandwidth, but neither was it great. 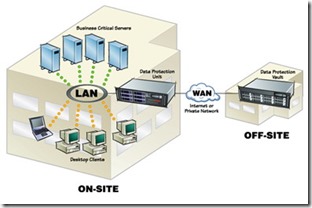 This means recovery can start immediately.

Better still – If its VMware VM’s you are replicating, you remote site can Instantly Restart and Rebuild those VM’s, meaning remote site Disaster Recovery in a matter of minutes.

What’s with Unitrends 7.1 then.

Its ideally positioned for backups in the 2-20TB region (or larger), especially for those environments where you are at your wits end with backup exec.

To find out more – get in touch for a demo or a deeper discussion about your backup needs and whether Unitrends V 7.1 is the technology enabler for you.