Unitrends Backup and Restore– Can technology really appear magical to a CEO
Posted on October 5, 2012 in Data Storage
The following two tabs change content below.

We work in ‘Backup’ – and for us, its one of the most exciting areas of the IT infrastructure space. 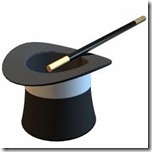 Backup touches every part of a customers infrastructure and requires dozens of pieces of the puzzle to work ‘right’ to make backup happen.

That includes the Application being protected, its server, the underlying OS and speciality systems such as VSS, then the network, the backup servers and the storage target for the data – be that disk or tape.

Throw in across the WAN DR, and the ‘difficulty’ score has just gone up by a factor of 5.

The more complex it is – the more we like it.

But what about IT and business people who don’t get a kick out of backup (and that’s 99.99% of people, meaning only 0.01% of us like Backup ) – They just want it to work, and know their business is restorable.

For those people (and thats 99.99% of you) – there’s Unitrends; the simplest and most optimal blend of technical function in an all-in-one appliance package.

And from this simplicity where backup ‘just works’, a few more people are discovering that Backup can be magical!!

Here’s a posting from one Unitrends users in the USA – Marc92 – http://community.spiceworks.com/topic/107096-best-backup-software-unitrends-backup-professional?page=9

Unitrends Users – and what the CEO thought

Marc has shown his CEO the process of Unitrends Instant restore

Unitrends isn’t simply ‘restoring’ data, but allowing a full (failed) server to be up and running in a few minutes

I can only encourage you to get as excited as Marc about Backup.

Maybe you cant get excited when you’re using Backup Exec or some other antiquated over complex and under ‘rewarding’ technology.

But take some time to learn about Unitrends and read the various Unitrends forums where people have regained their passion for backup.

Maybe (just maybe) – If enough people in the UK discover Unitrends, we might just increase the number of people who enjoy backup from 0.01% up to 0.02% – which would be a 100% improvement!!.